It's a very happy Monday because today I've got TWO fun things to distract you from work! First, there is the reveal of my studio makeover with Laurel & Wolf, including everyone's favorite - the before and after photos.

When I first moved into this studio space in October of 2014, we were a company of six, plus an intern; this meant that I had a lot of space to work with and design the studio to perfection. The immediate updates were custom window treatments as well as painting the walls white. Part of the space is exposed brick, which I also had painted white for consistency and to add overall brightness to the space. The idea was to make it feel like a home or ‘club house’ as it incorporated both desks and living room type areas to relax in. Not including a storage room and the kitchen, the studio was divided into three primary rooms: the main studio, my office and a conference room. 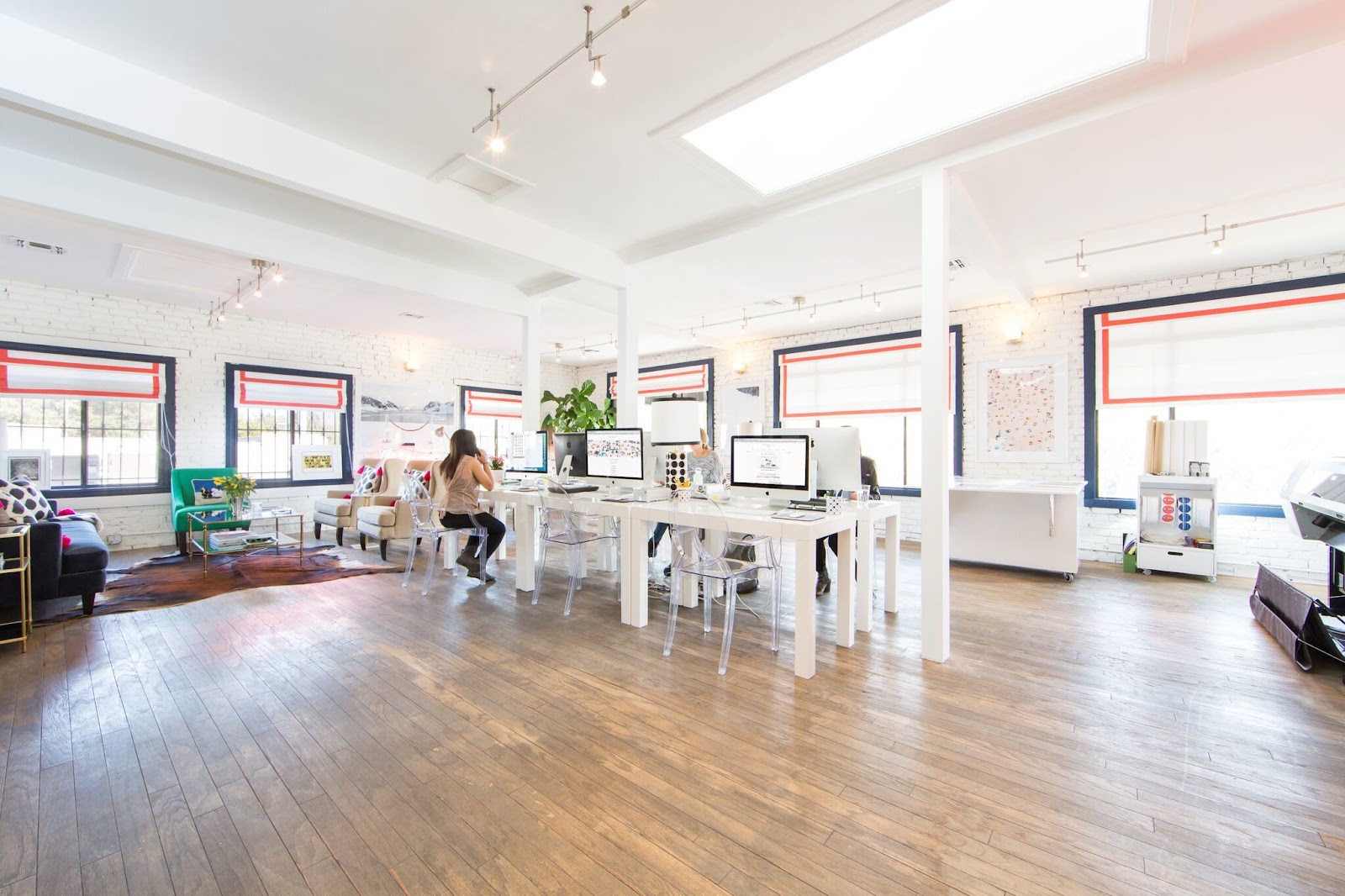 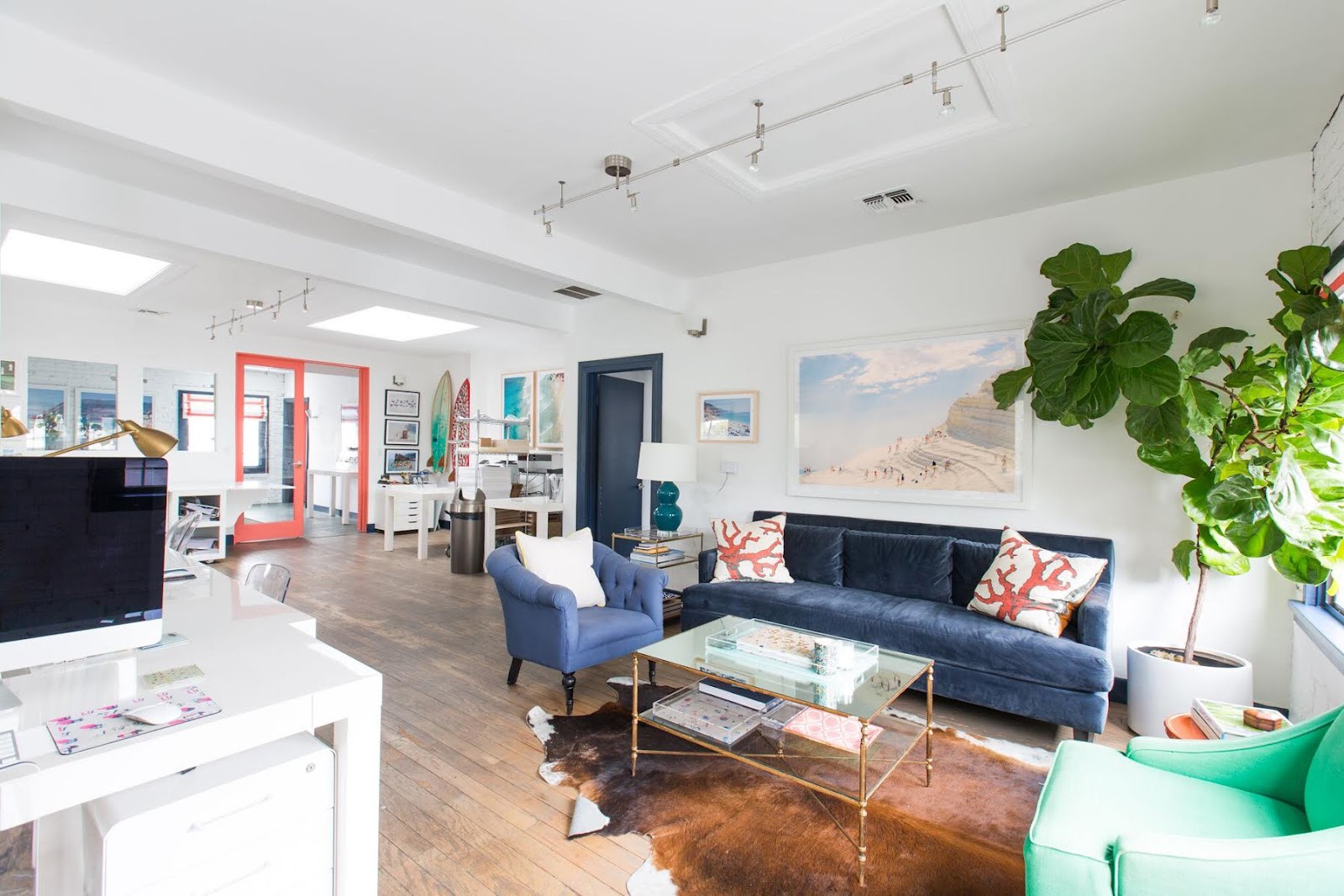 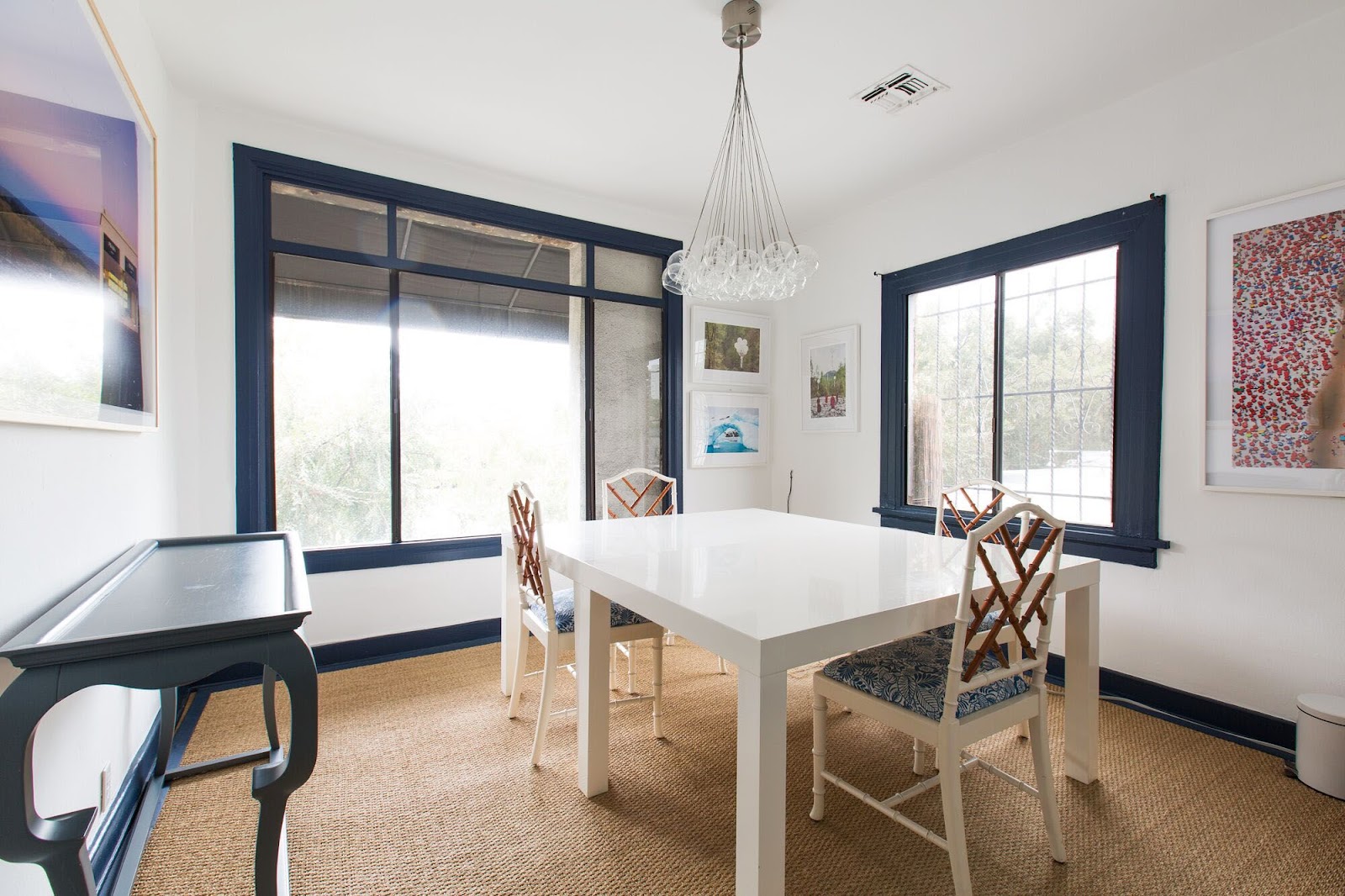 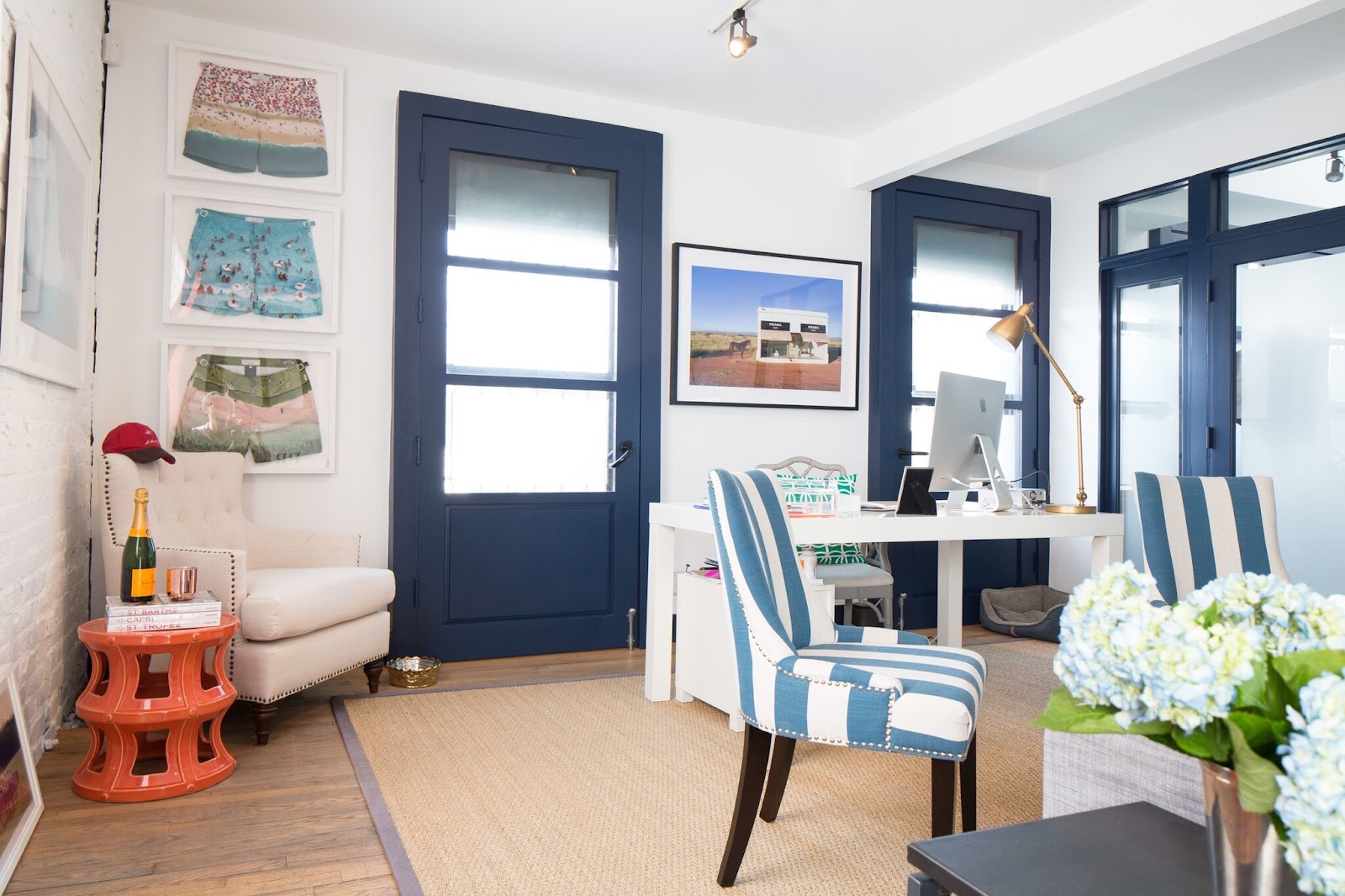 As we grew, the use of space became trickier to balance for both functionality and comfort. For the initial fix, I moved out into the main room to be with the team as well as to free up my office to be a multi-purpose room, specifically a photo shoot space, a secondary conference room and a designer showroom. 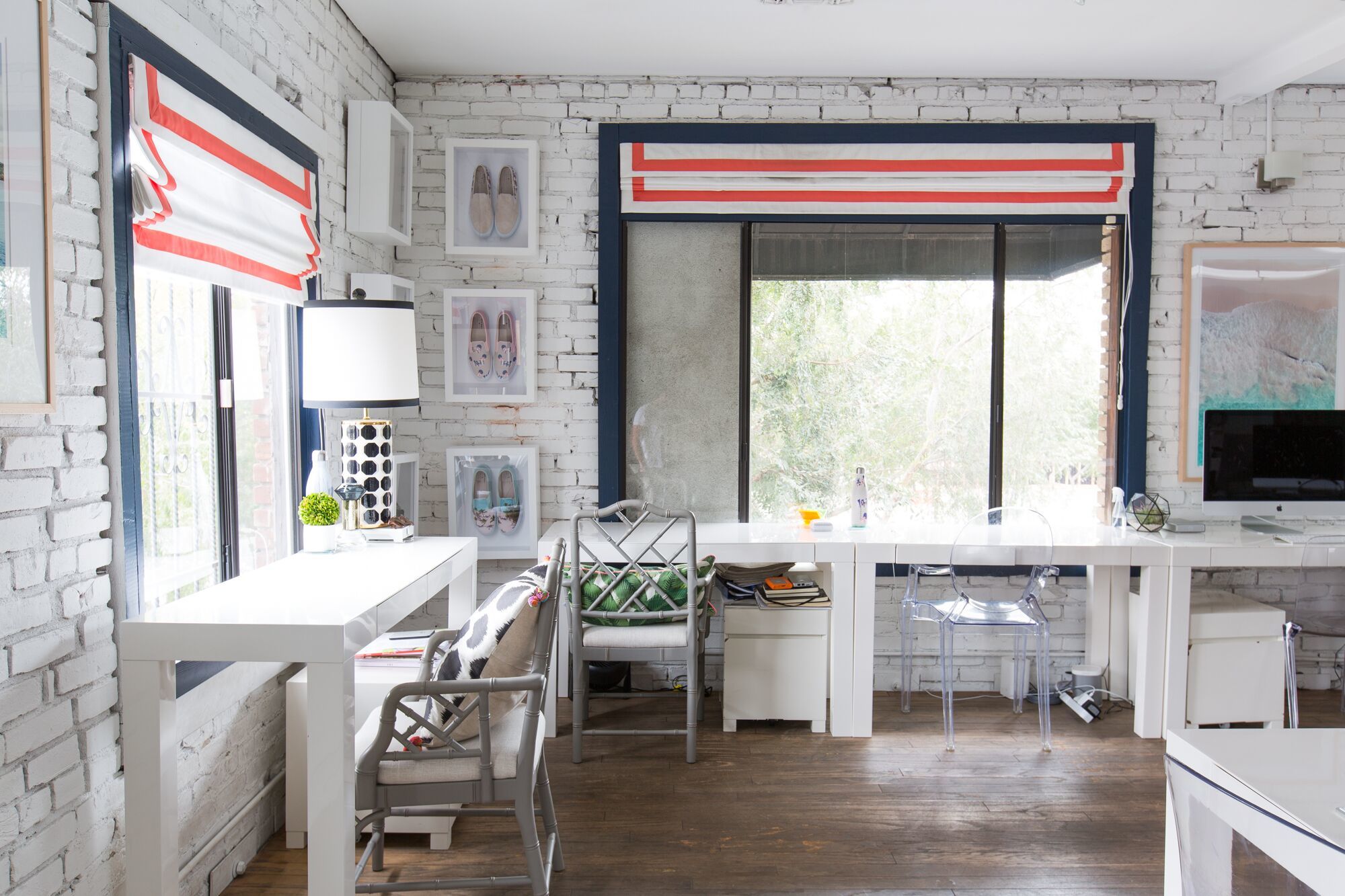 This change helped alleviate certain issues but ultimately with a growing staff, I knew there had to be a more definitive solution to making the office work more efficiently. With the addition of each new team member, we would add a new spot to the middle double row of desks. Once that became not possible, the desks began to line the back side of the room, which overall was fine, but it was not sustainable. 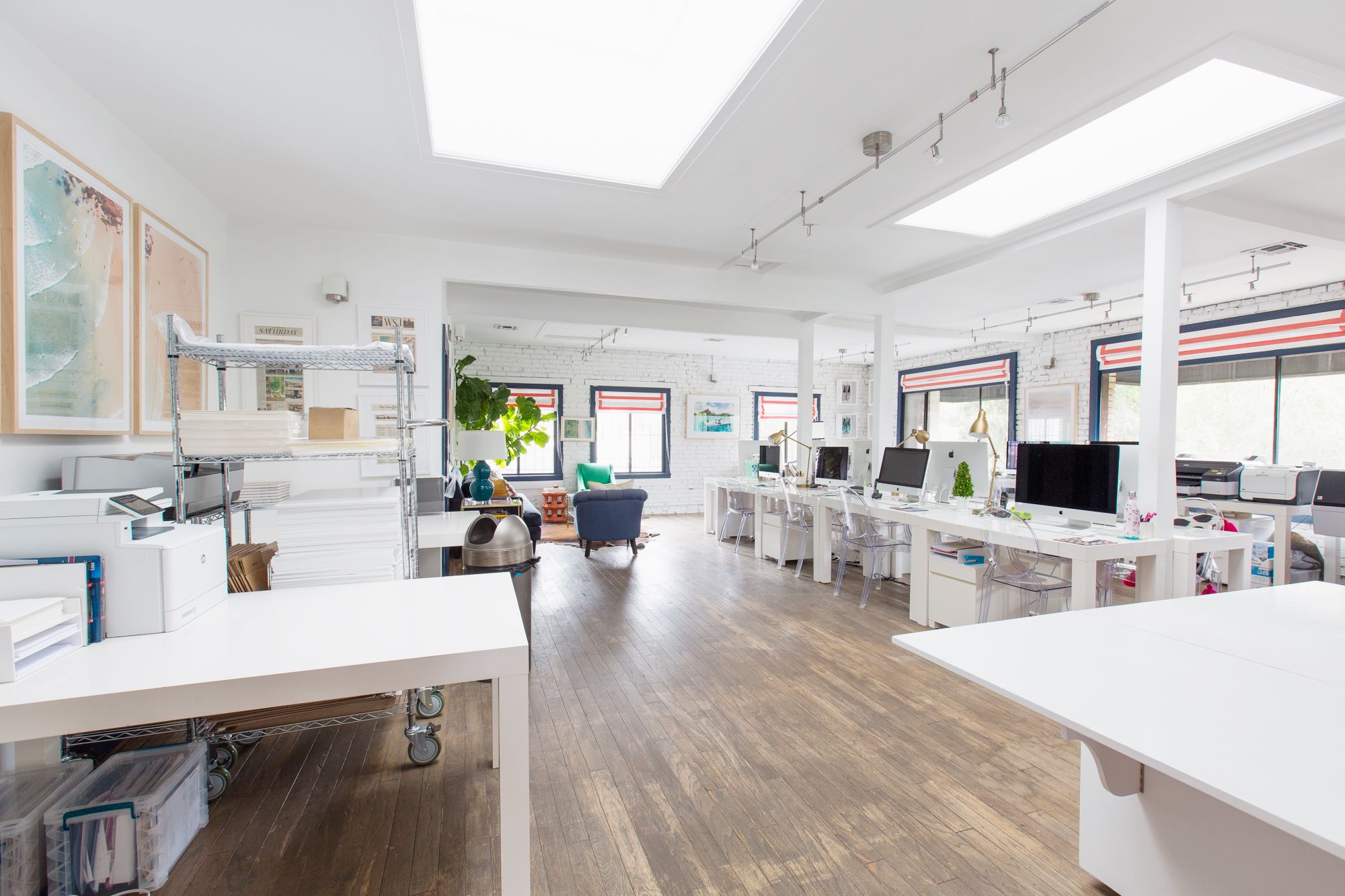 The space was certainly large enough, but we weren't utilizing it all in the most functional way. After countless months of thinking about it, as well as talking about with the team, the conclusion was we needed a fresh pair of (expert) eyes on the space. Enter Laurel & Wolf and their recommended interior designer, Gwendolyn Gibbish, who were up to the challenge!

During my initial discussion with Gwen, I conveyed to her that first and foremost, I needed help on the studio’s layout. The company has grown since we moved to the studio and I needed an expert’s eye to figure out the best way to create a smart flow of furniture without sacrificing the team’s functionality. Up for the challenge, Gwen and I quickly settled on keeping key practical pieces like the desks and workstations for our operation team and master printer in the main studio. As for the other two rooms, we focused on identifying the best purpose of each room, which impacted what would go in it from a design perspective.

Based on input I gave her, Gwen began sending through multiple layout renderings for my review. Upon receiving them, I met with my team to review the variety of options Gwen put forth. It was important to speak about it with everyone ahead of time because it is a place of work, and we all would be affected by the change. For me, it was of the utmost priority that the effect be nothing but positive. After our internal discussions, I went back to Gwen with a few minor tweaks to the best layout.

Once that was squared away, we turned our attention to the fun part and by fun part I mean, shopping for new things! Gwen would send through mood boards for each room, and I would simply click the heart on Laurel & Wolf’s platform or did not. It was that easy for us to communicate and make decisions quickly.

A large framed Porter I from the Parker can be spotted upon arrival, primely located at the top of the stairs, along with one of my favorite prints from Bhutan, Enchantment. 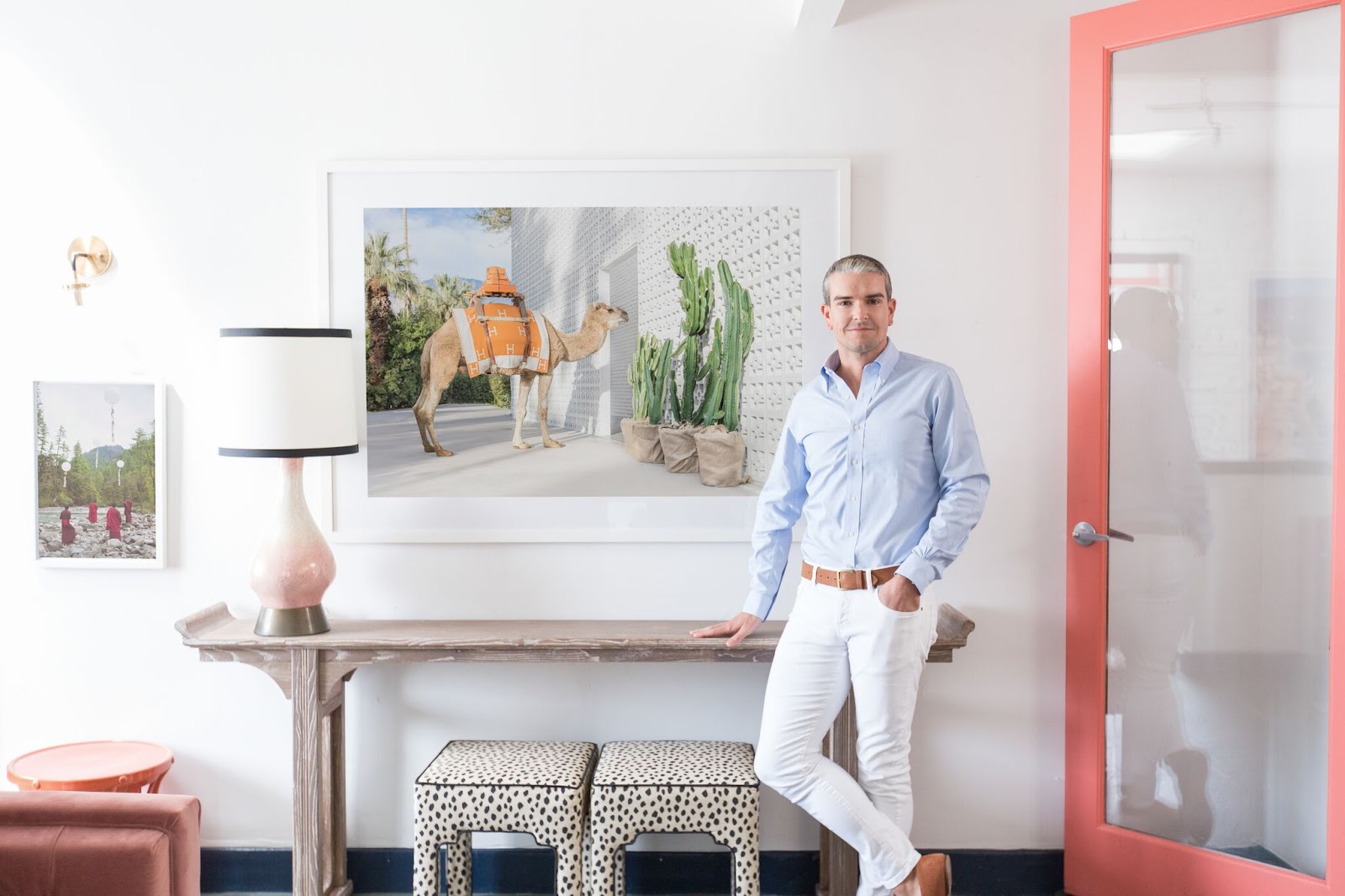 As the layout came together, the space opened for a lovely new area to relax in, which meant a beautiful new burnt rose couch in our lobby along with an excellent set of bamboo chairs. 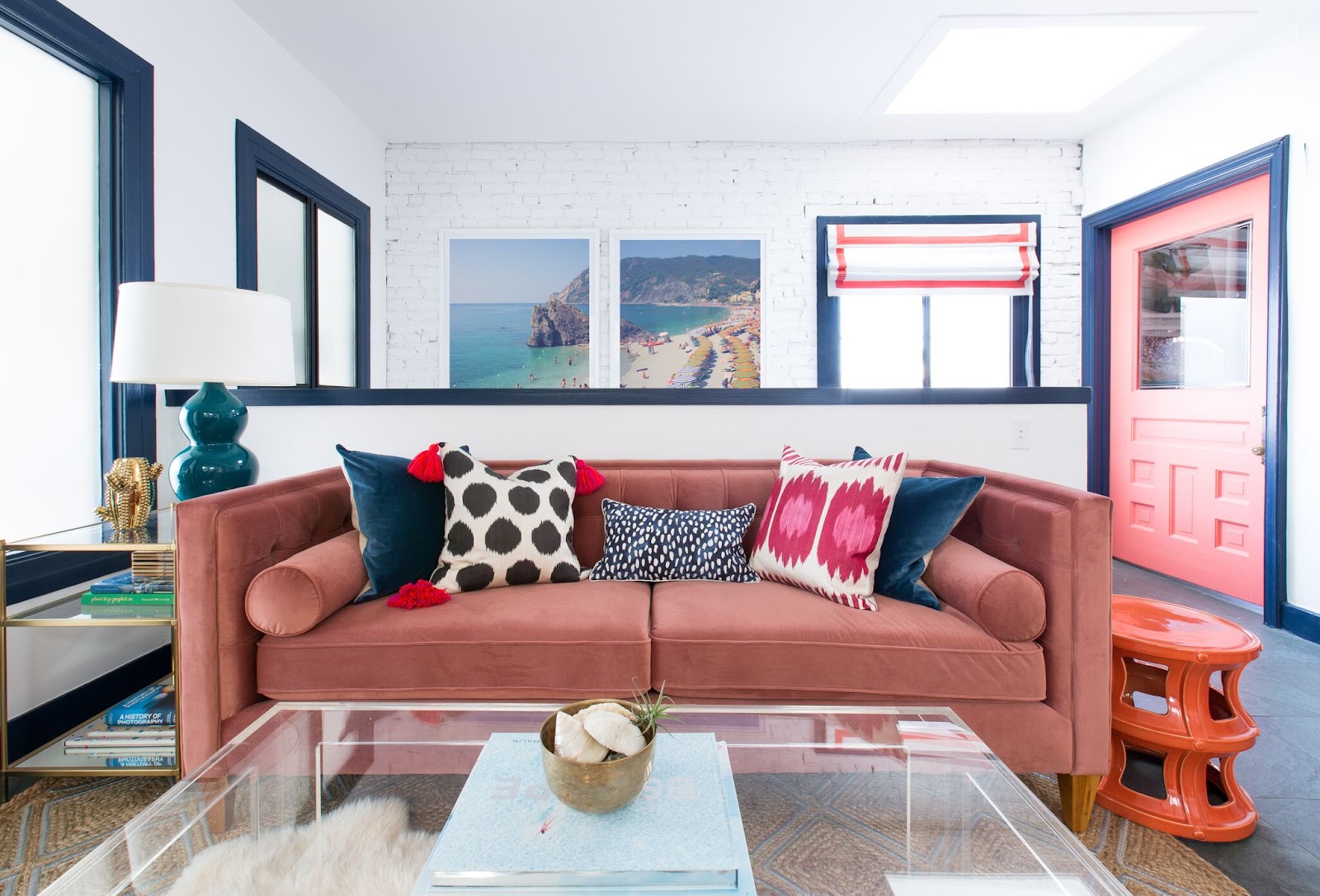 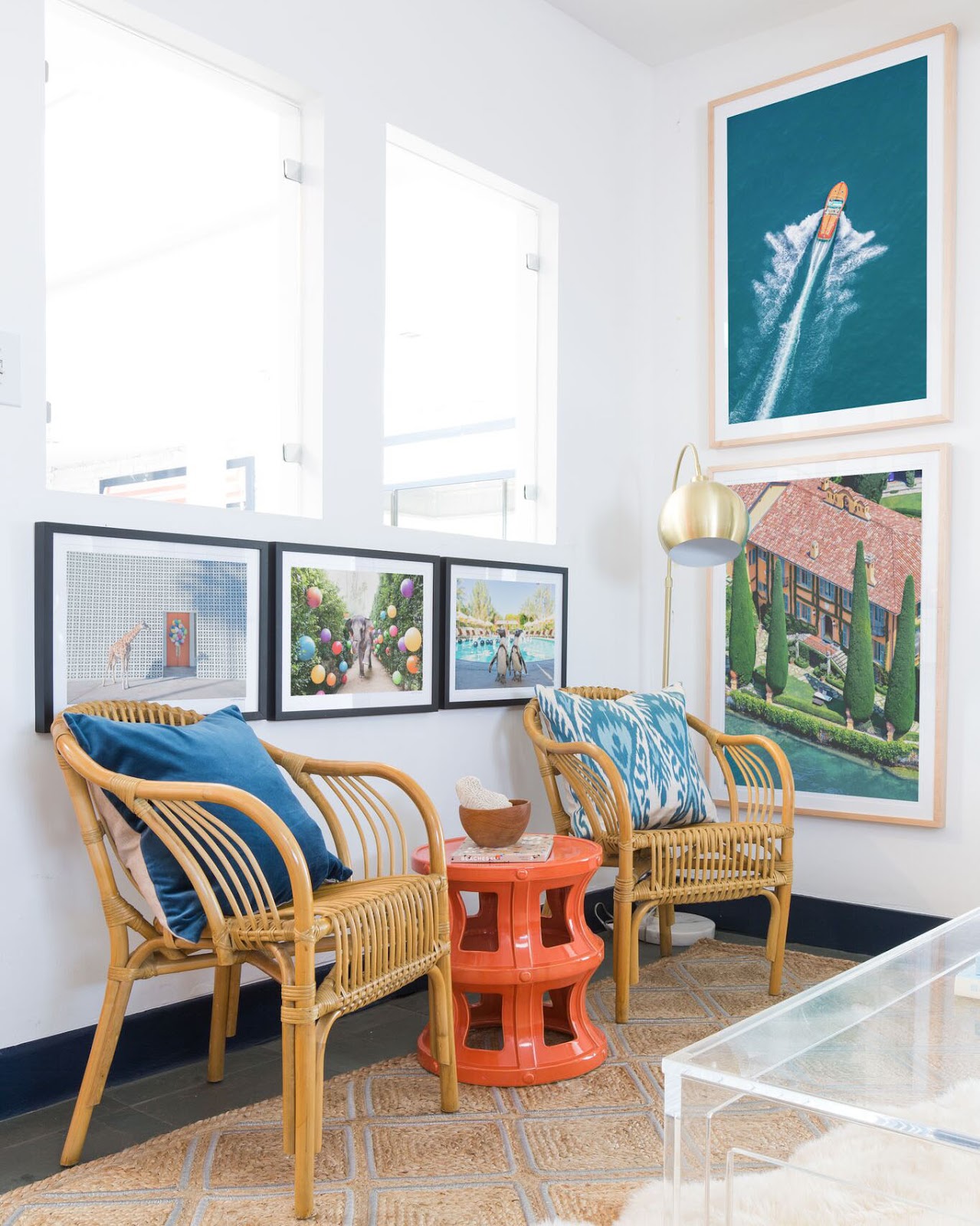 I love these bamboo chairs and textured rug! Specifically, I think they look great with the natural frames. This little nook in the lobby area has truly come to life with new releases - Wooden Boat, Lake Como Vertical and Villa la Cassinella, Lake Como Vertical, as well as three small selects from the Parker series. 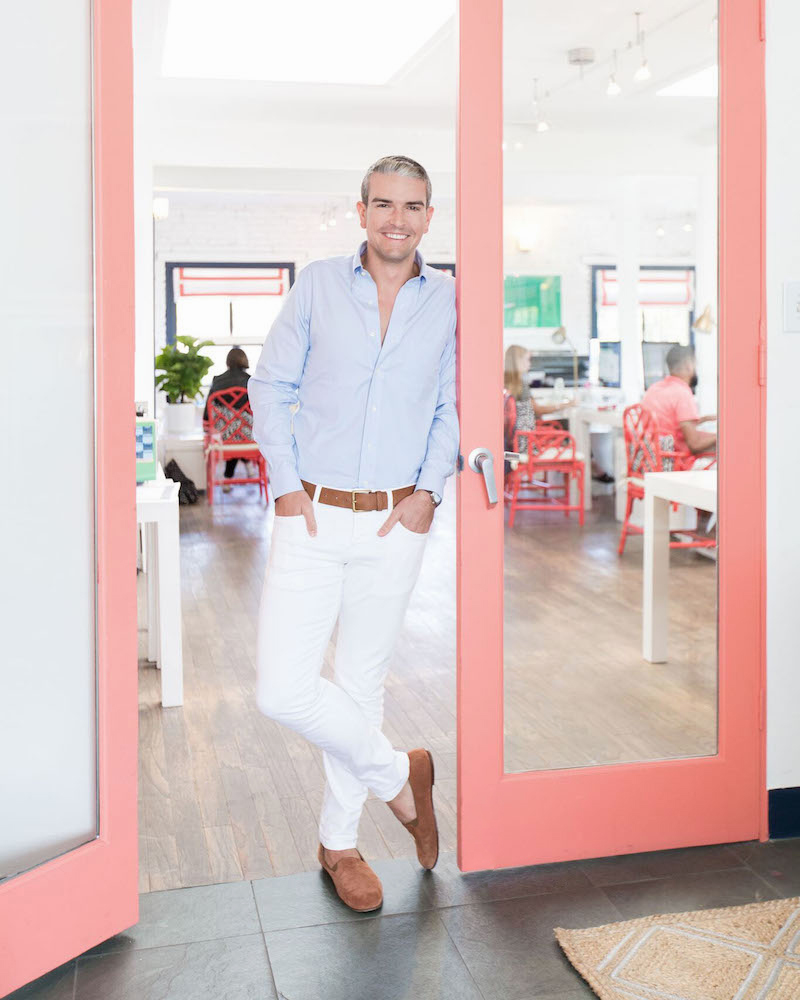 I’m guessing the first you think you notice is the attention-grabbing pop of color office chairs, which I love but first...let’s talk layout! 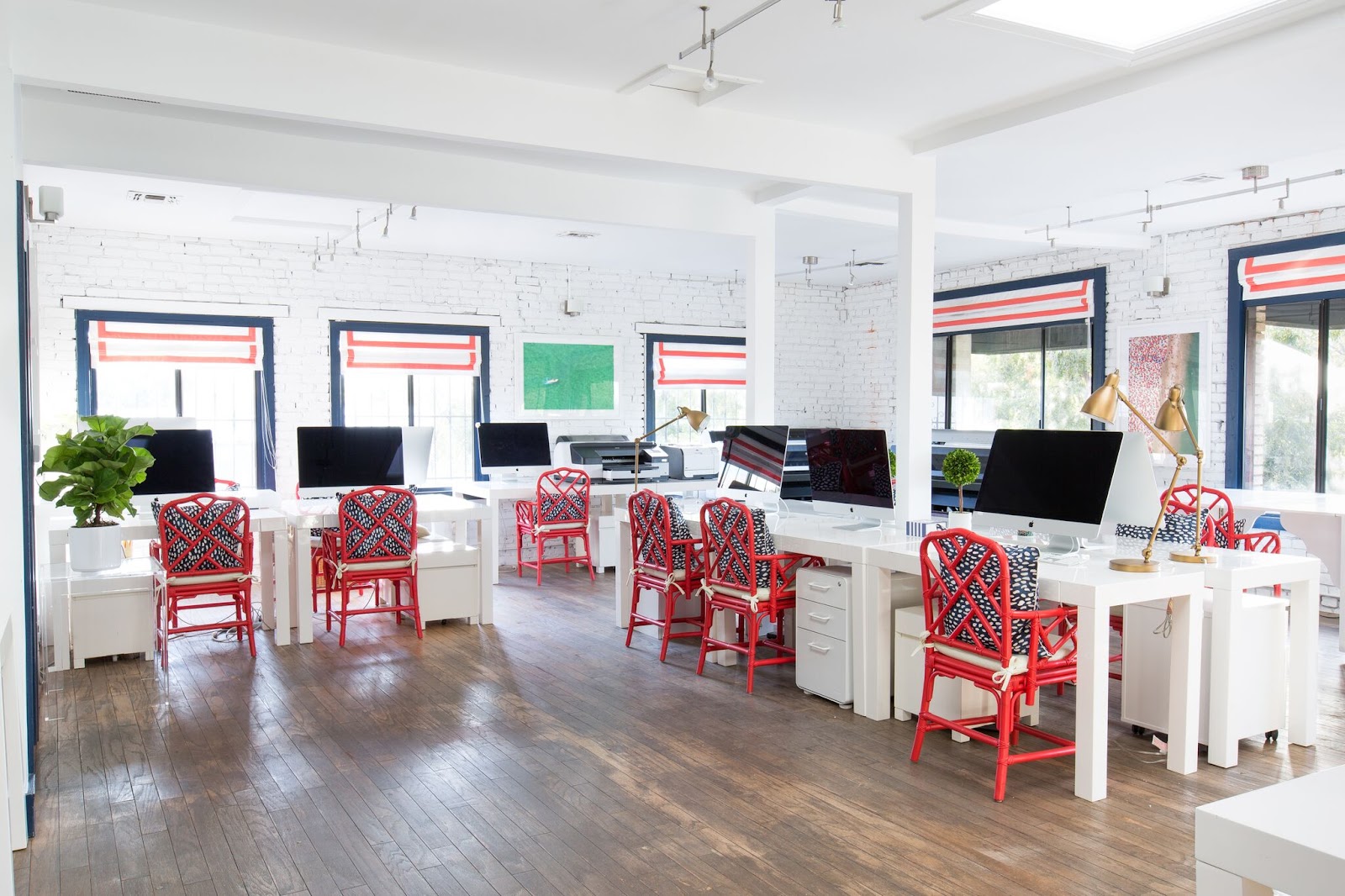 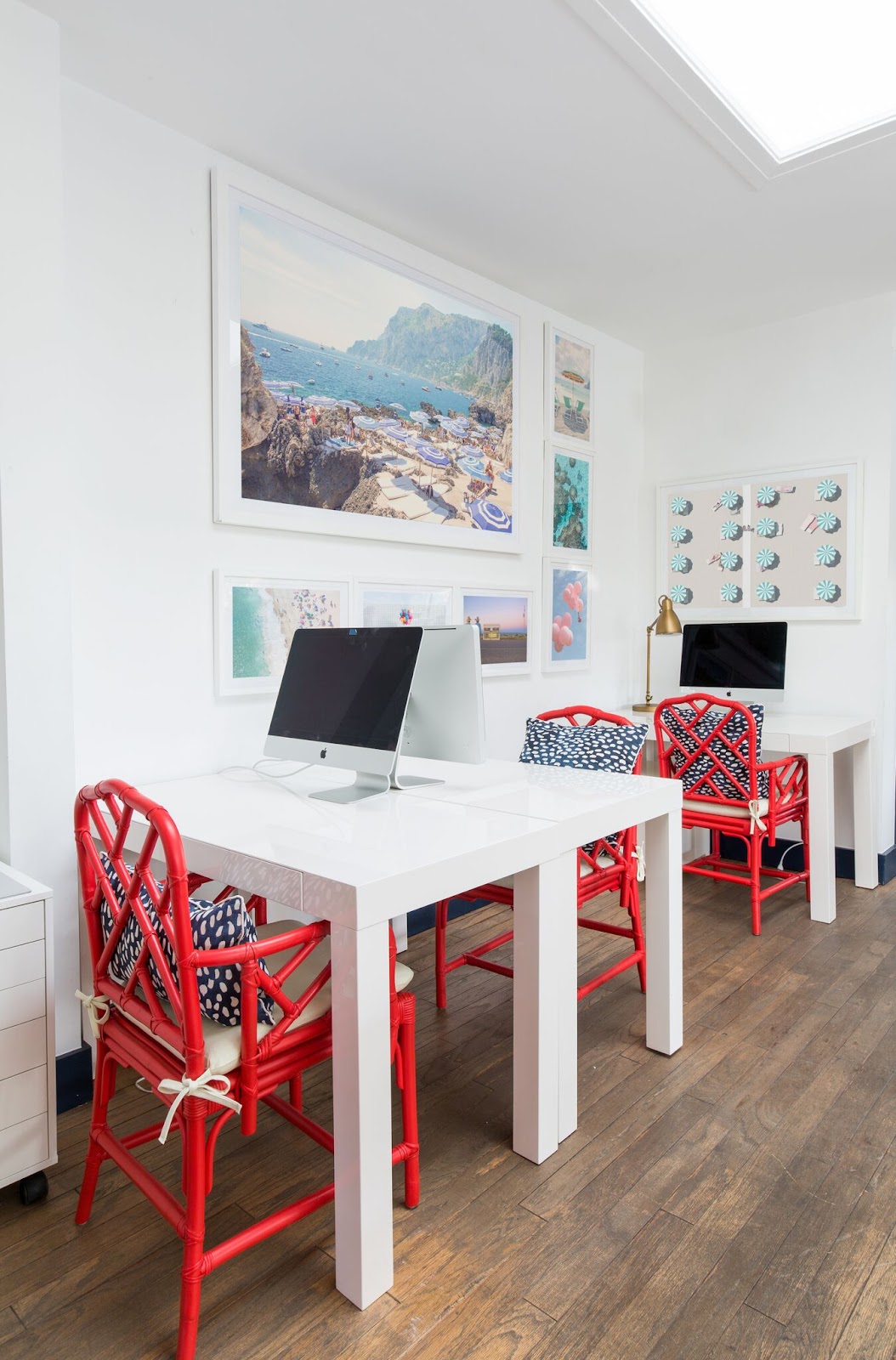 I know I keep mentioning it, but it really was a challenge to figure out a better layout for the workspace. We are a team of 14 people, and we all have individual needs as well as group needs for a functional workplace. This was heavily emphasized to Gwen, and I am happy to report that she heard us and delivered something that we were not capable of seeing!

For example, the operations team needs to be seated together for ease of communication as does the creative team. 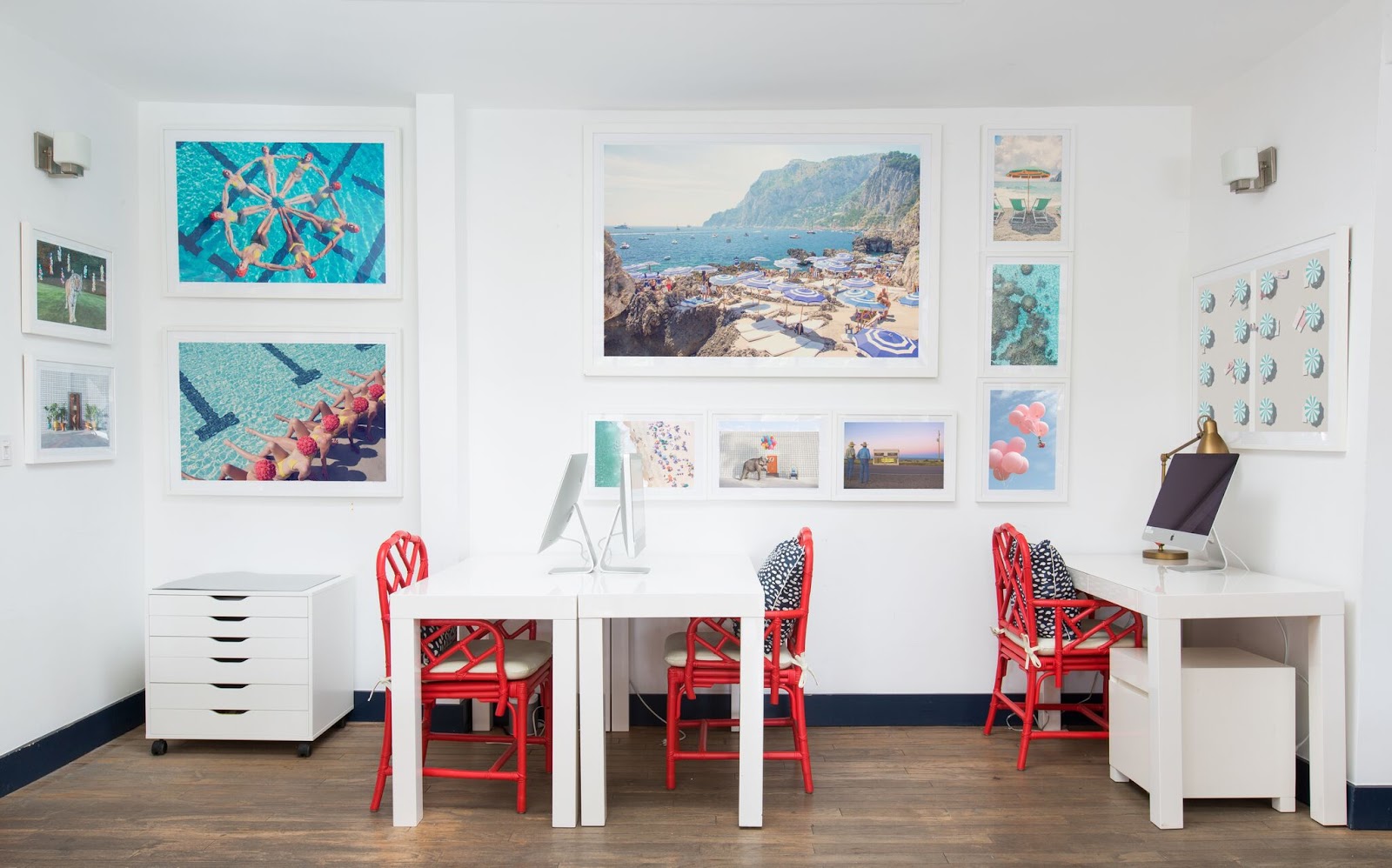 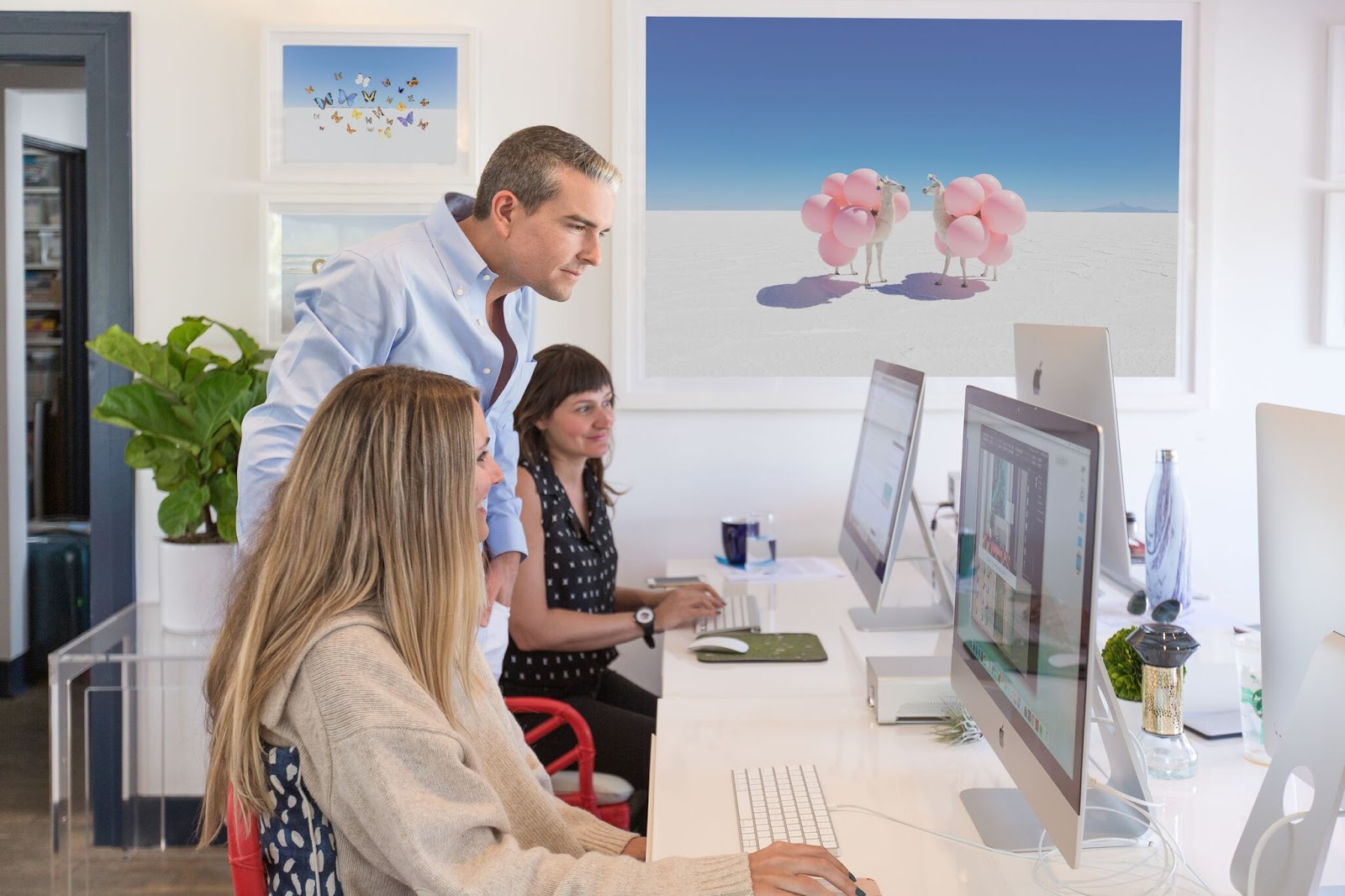 My desk is now part of a four-quad made up of creative team members, who I’m in constant communication with, oh and I love being sat closely to the large framed print of Two Llamas with Pink Balloons from our latest installment of Far Far Away. Dividing the desks into smaller groups versus the previous layout, which admittedly was more reactionary than reasonable, provided not only more space for operational needs but it also improved the team’s workflow.

As for the chairs, I know they’re technically not necessary for improved work performance, but they really took this makeover to the next level! The chairs were the one item I knew for sure I wanted to change, and the only input I had to give to Gwen on this was that I “wanted them to pop!” This, of course, is open to interpretation but Gwen succeeded in finding exactly what I didn’t know I wanted - beautiful coral chairs paired with navy and white toss pillows from Ballard Designs. I was so in love with these items, Gwen and I ended up doing a deep dive into Ballard’s site, which resulted in quite a few other items from this European influenced furniture brand. 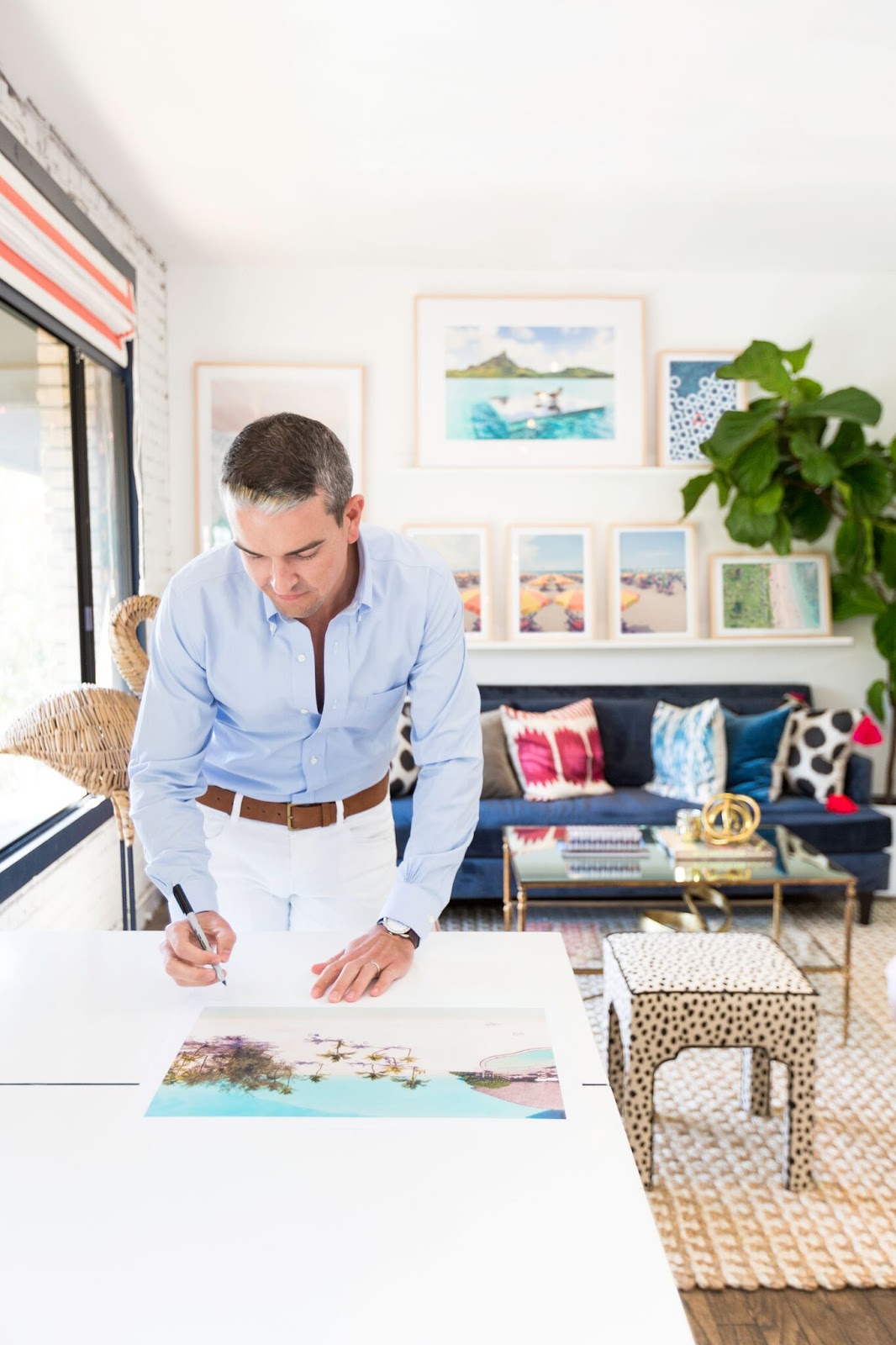 By moving the print drying tables away from the entrance to the room, it immediately opened the space to feel less congested. It wasn’t something that I was aware of at the time, but it’s nice to do my signing in a less trafficked area. 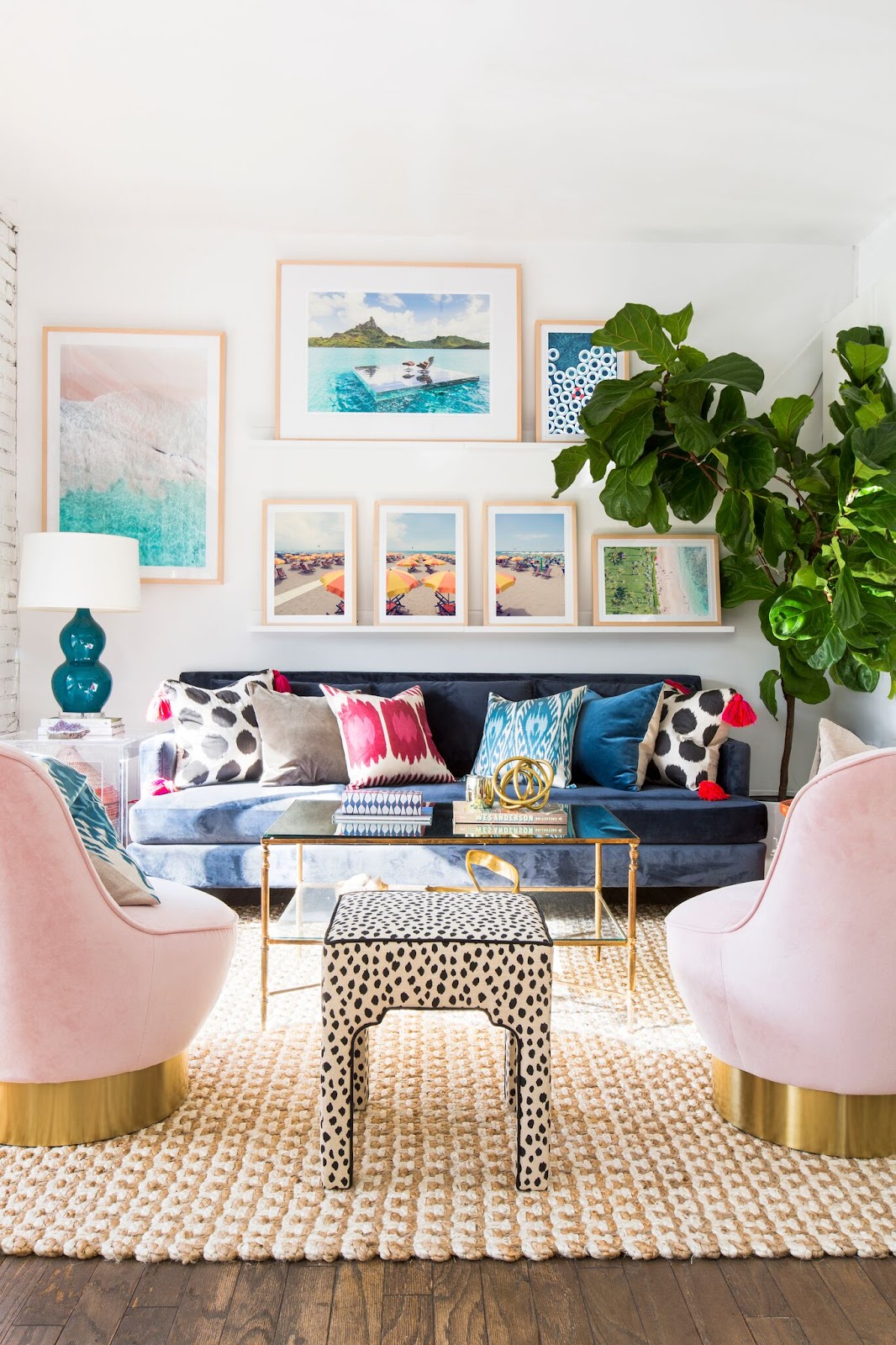 Last but certainly not least, we moved the lounge area caddy corner to its previous location. This was another aha moment for myself and the team, as we all immediately commented on how we liked this new setup. It feels a bit more detached from the rest of the room in this new corner, so when you’re taking a break or eating your lunch, you feel a bit more of a departure from the rest of the team.

With the functionality improvements covered, I’m also happy to say that we LOVE all the new furniture and decorative accessories. As you’ll notice, we were able to keep quite a bit of the furniture, which now feels brand new with the updated pieces. This navy couch, for instance, was one of my first purchases for the studio as was the mirror and brass coffee table. I knew I wanted to keep both, and Gwen didn’t fight me on that, rather she made them feel fresh with the addition of the millennial pink lounge chair set, a new rug and the clever built-in shelves above the couch.

Not only did we gain a charming new lounge area, but we also yielded an innovative way to display additional artwork. The Wave, St. Barths is prominent hanging alongside the top shelf of a medium The Study from Art of Living and small Light Blue Azure. Below, we’ve got a great way of displaying the triptych, Rivabella Umbrellas, next to Palm Tree Beach, Kauai.

Moving into the conference room, I was pleased to see this new light fixture as the previous one was never really my favorite. It came with the space, and I always intended to replace it but hadn’t gotten around to it. We also doubled the size of the table and incorporated our old office chairs in here, which look great with the stylized new rug. 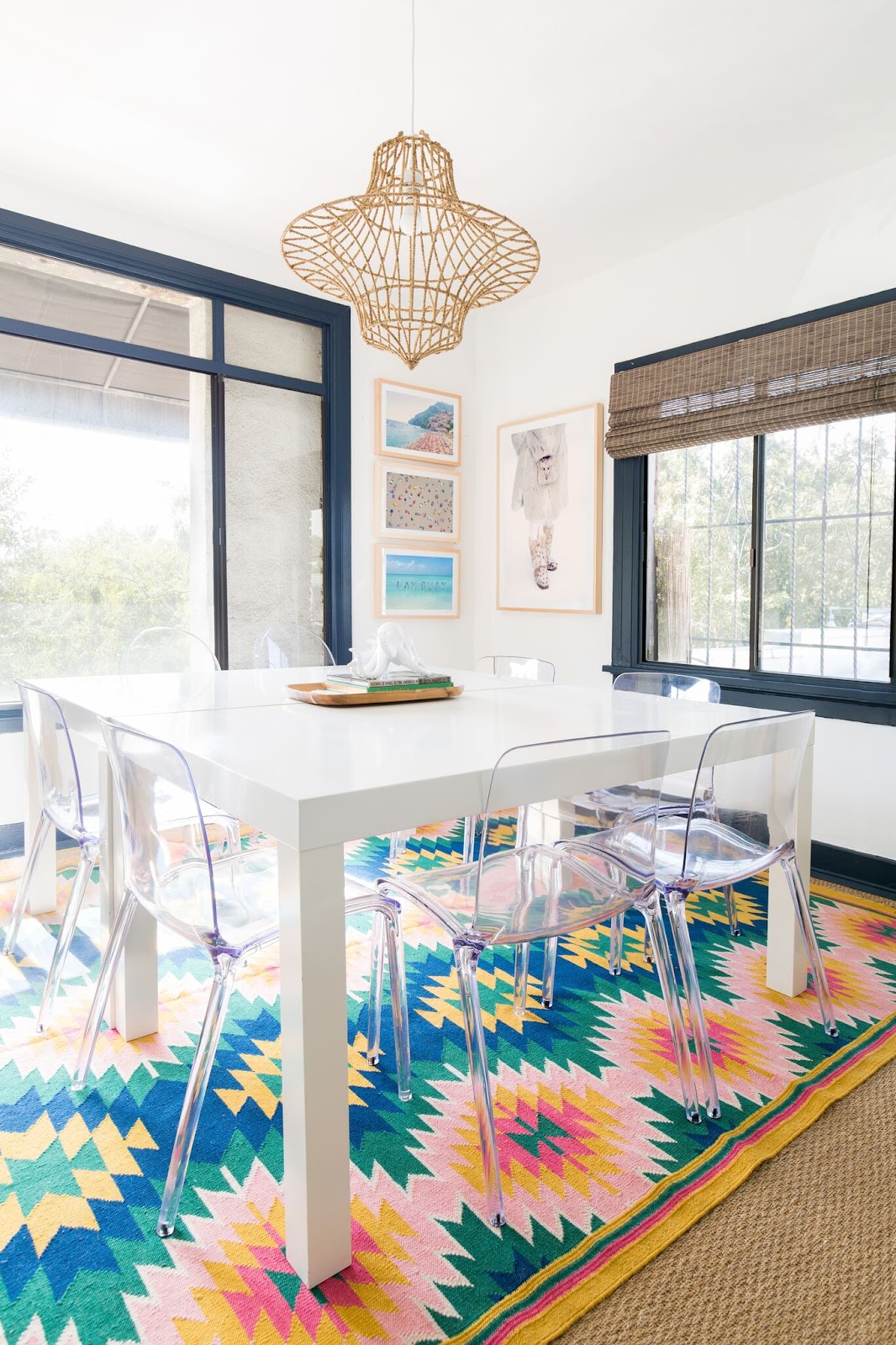 As for the art, I went with three of our most popular small prints: Positano Coast Beach, Lisbon Umbrellas and I AM BUSY along with one of my favorites from Snow Polo, The Fox.

Now this room, I can’t believe how much better and more functional it is. This room above all the others was the room that just became a catch-all for anything and everything, so I am so happy to get it back on track...not to mention looking awesome! 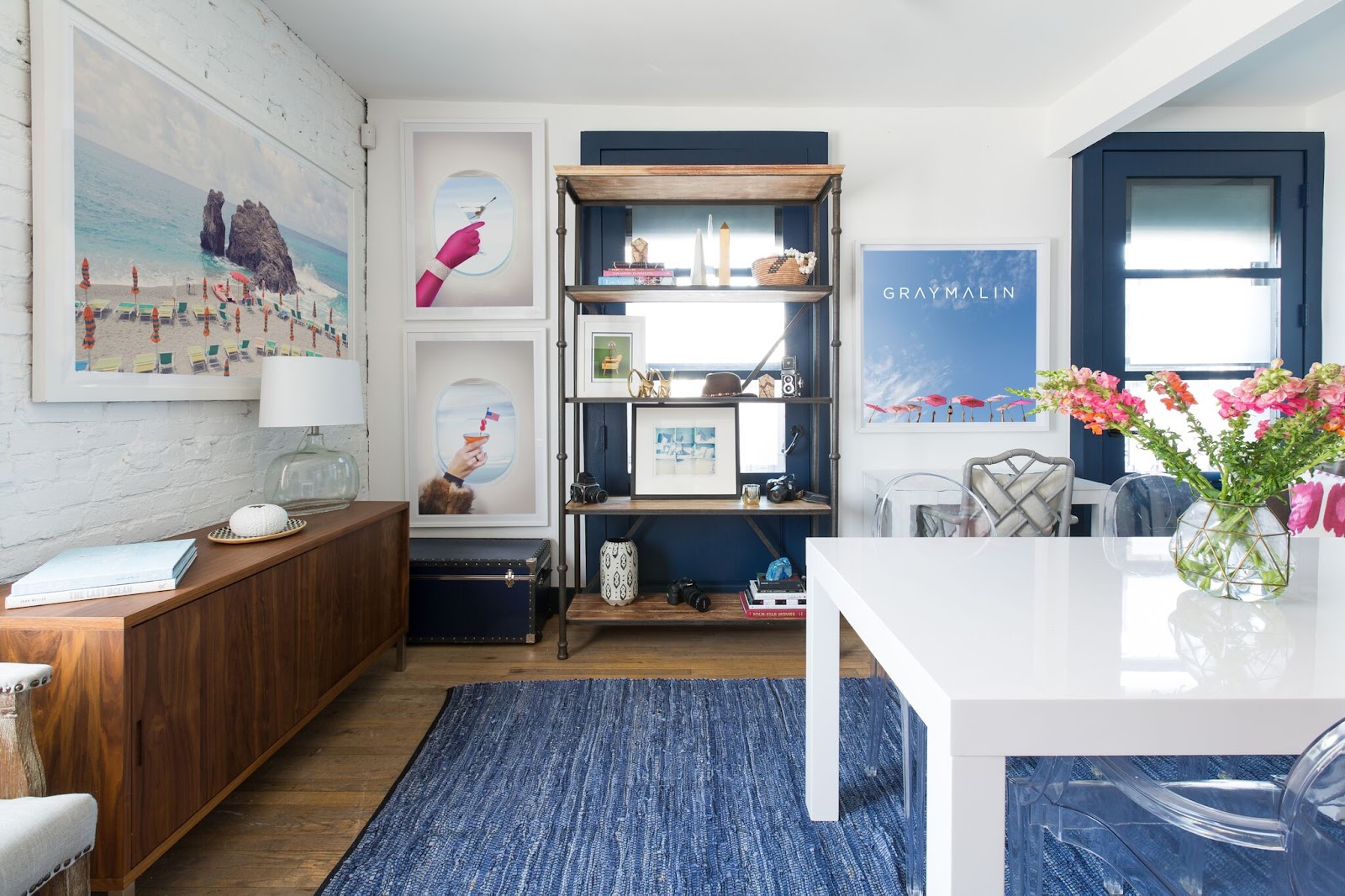 Keeping with the additions of new rugs, I really liked the relaxing blue shade of this one. The new credenza is also a beautiful piece, which provides a chic new hiding place for all our various photography equipment and miscellaneous office supplies. It also looks great under the large Bagni Eden, Cinque Terre. 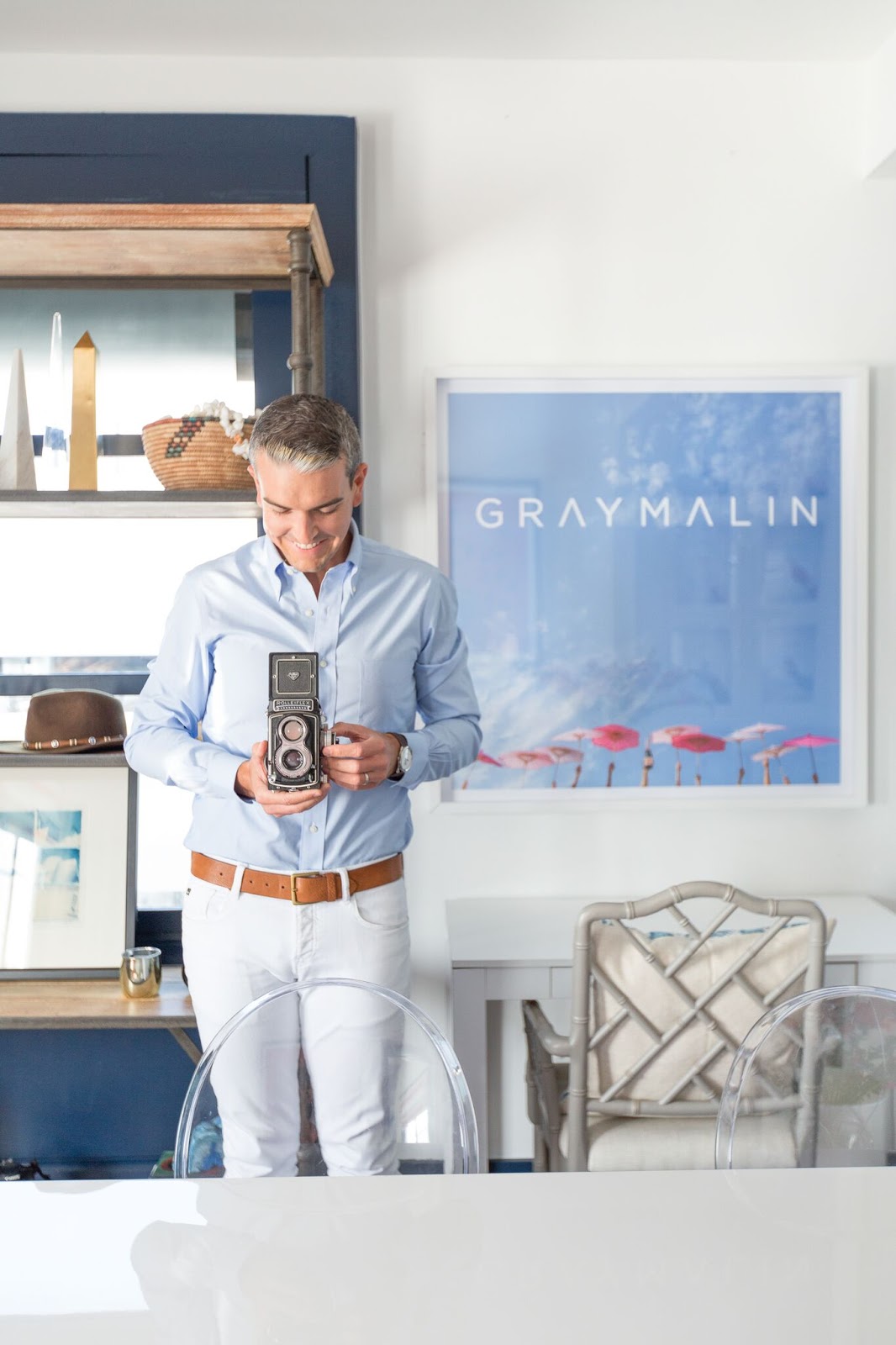 Once the disorganized catch-all room, it’s now a productive one, which was quite the problem to be solved...and a good looking one to boot! We’ve got an adorable elephant keeping us company, along with two of my favorite passengers from Bon Voyage. 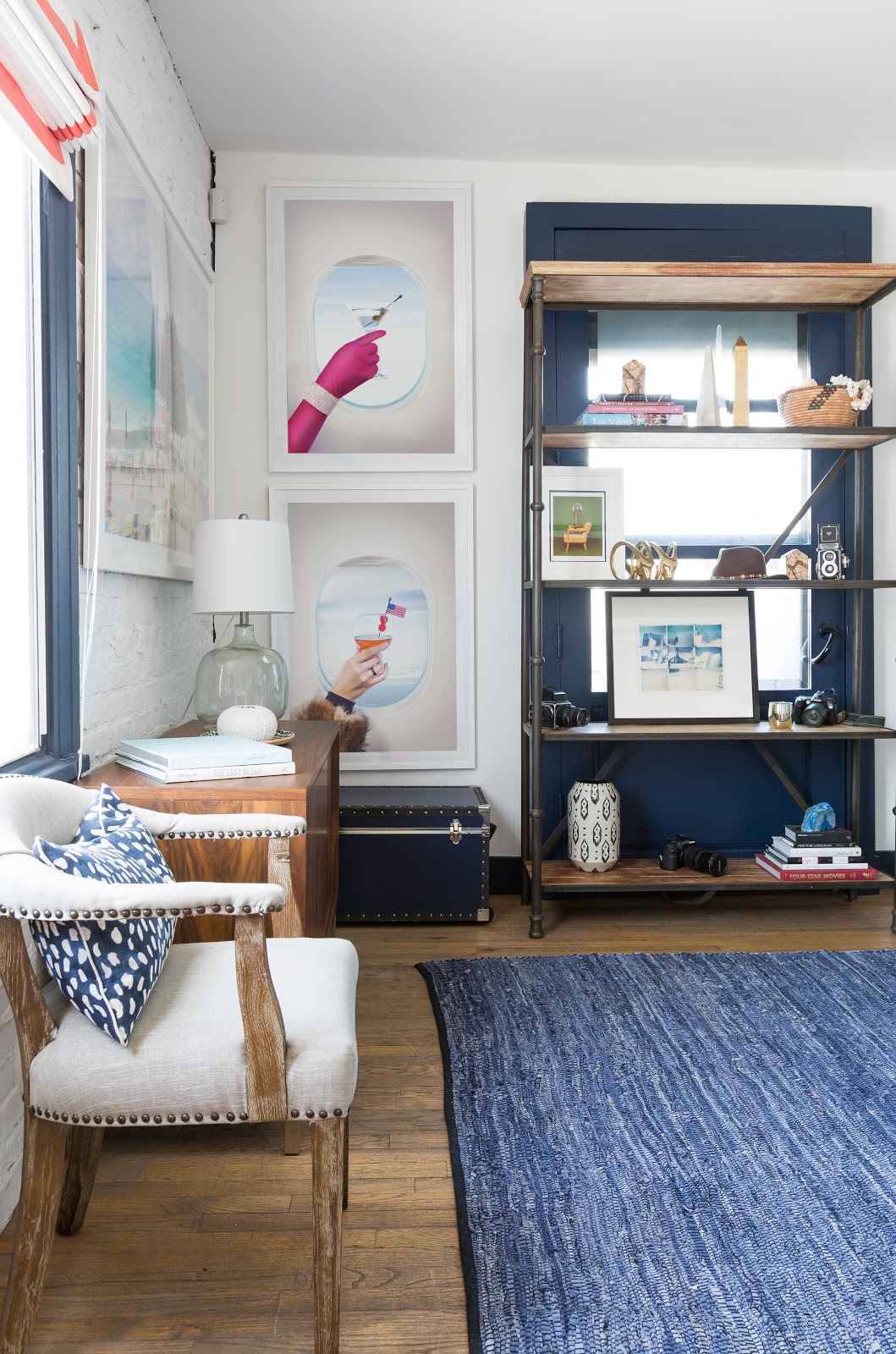 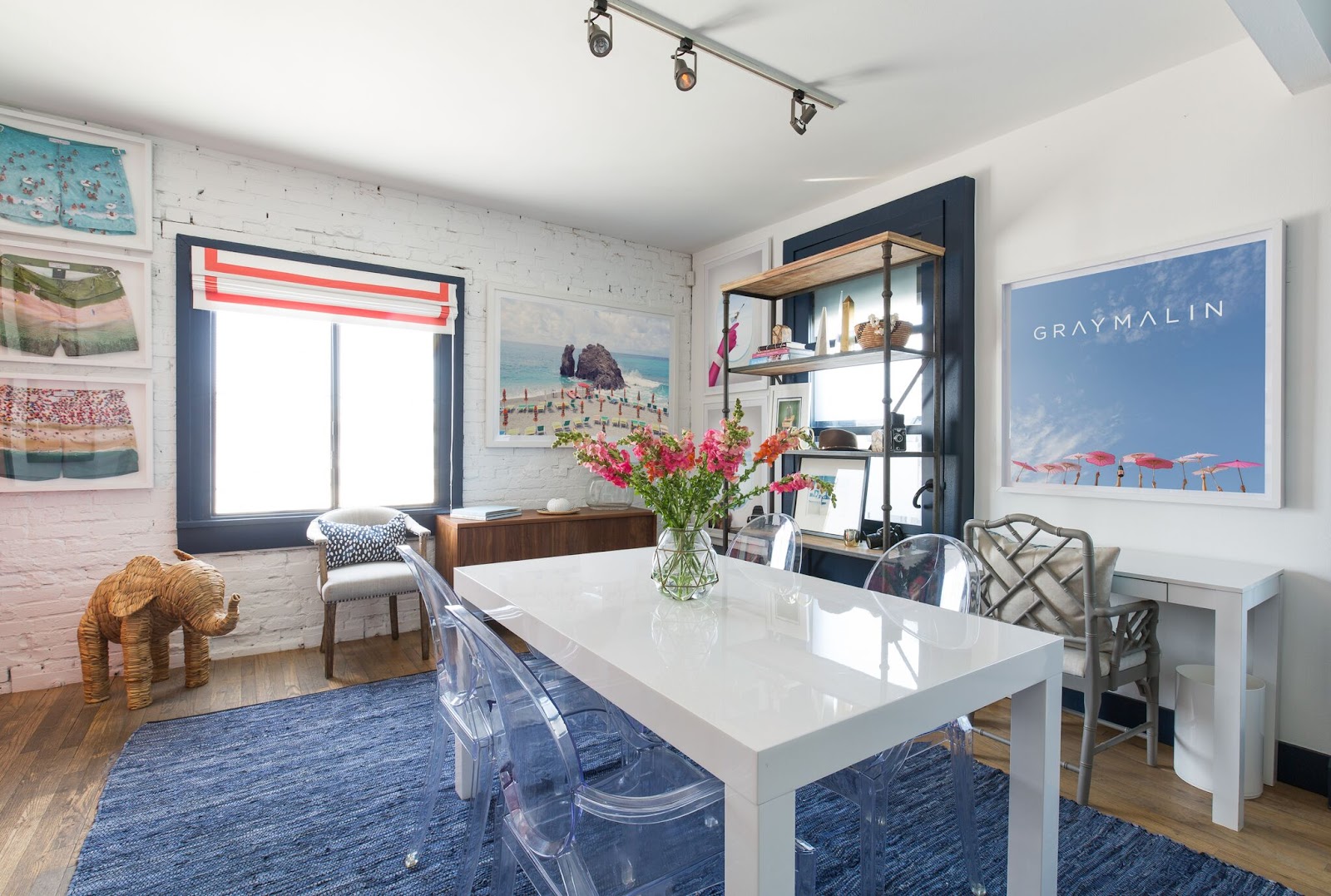 And, there you have it! We’ve come a long way from the early times in 2014 in more ways than one. When it comes to the studio itself though, I am happy to admit that sometimes you just need to know when to ask for help, and I couldn’t be happier with that decision! 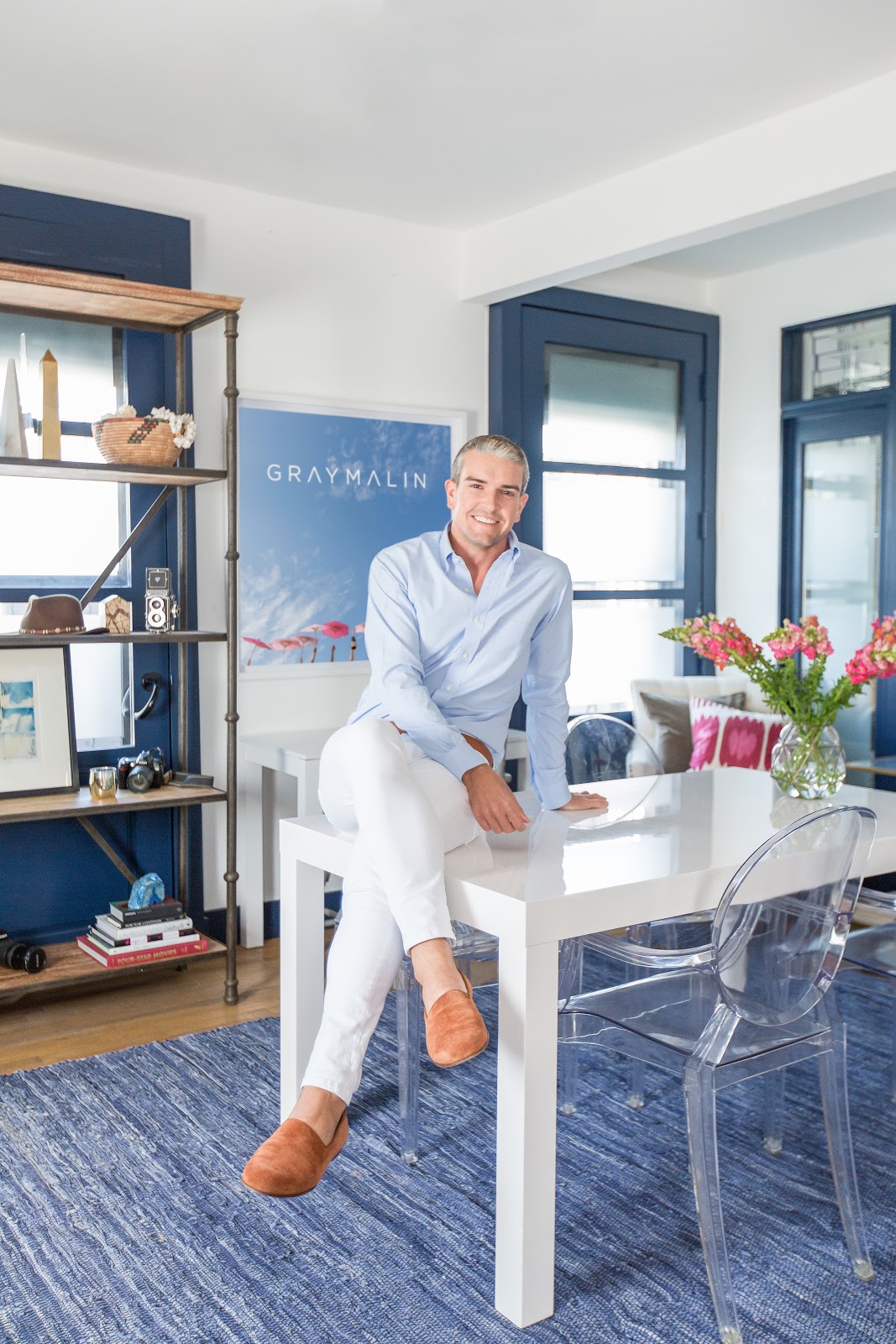 I hope that this makeover story inspires you to take on those pesky layout problems as well as add another piece or two for good measure. I couldn’t have done it without Laurel & Wolf and their designer, Gwen.

This site uses cookies to allow better navigation. By closing this banner, scrolling this page or clicking any of its elements, you are giving consent to all cookies. To learn more and to change your preferences please see our Cookies Policy.